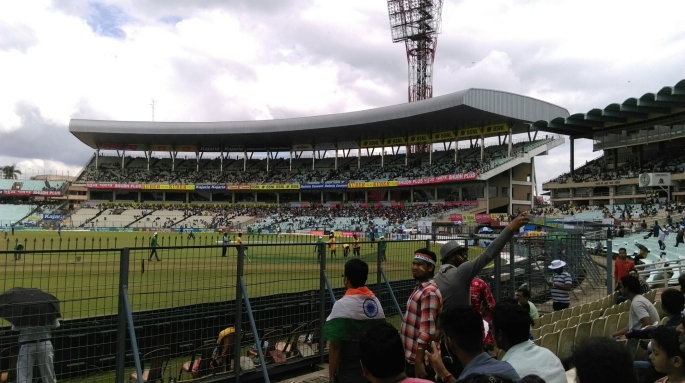 My excitement was the same as that of the small child, who has just seen the new toy in front of him, as I had seen the India-New Zealand Test Match Ticket in my hand.

Why not ? I was going to see the International Match first time in my life, that too in the Eden Gardens, “Mecca” of the Indian Cricket.

My search for the tickets starts on the saturday evening at Ticketgenie.com, which is the official website where tickets can be found, but I was dissapointed when it shows no availability. Than I checked about the timings when it could be available on ground, but it could be available only after 10am, which means I was going to loose initial couple of hours, but I had no option.

So on the Sunday Morning, we reached eden around 11pm (because of sunday morning extra sleep), and very easily got tickets from the Mohammedan Sporting Club, which was situated just outside of eden gardens. I was like yeeeeeee….

Than finally we headed to the ground which is about 200m from where we have purchased tickets and parked our vehicle.

Inside the Eden Gardens, the environment were terrific, even it is a test match, but still there were Aahhhh and Uuuuhhhh, whenever the Indian batsman misses the balls and there were roars when he hits fours or sixs.

Yes we were lucky to see almost half of the Indian team batting, as in front of me they had loose 6 wickts within 100 runs.

We have been there for the whole second session that is from lunch to tea, after that we departed.

Overall it was an awesome outing watching the International Match first time that too in a big place.

Just returned from Bhutan trip on this Puja vacations, and I experianced this beautiful country from so many ways and most of my experiances were good in this Land of Thunder Dragon.
But I have observed some good rules and wonderful practices which I don’t see in my country India.

Some of the good practices in Bhutan are :

So my simple question to you all is that, For all these awesome practices, only the government is responsible by making strict rules and implement them, or the citizens of that country are highly responsible for maintaining their own country, like Bhutanese do ???

But still my body wanted to lasted..

But my body knows his patients wanted to get cured..

So my body keeps running, so that it can help to make their patient’s body running..

Hope these are thoughts that may have come into the Doctor’s mind, who keep doing night duties, even when he exhausted all of his energy, starving, but still perform his job, because he is suppose to..

Taking part in Blogchatter‘s #Dailychatter campaing in this october.